Kylie explained how she became part of this unique aviation experience. “For two and a half years, I’ve had the opportunity to help build an RV-12  at the Meriden Markham Airport alongside other students from Wilcox Tech (Meriden). The Teens to 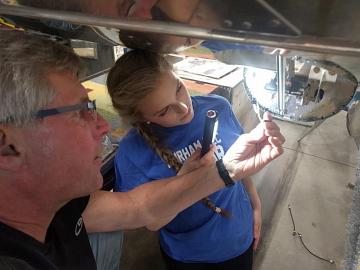 Flight program began assembly of the RV-12 in September of 2015, but I became involved in building the plane shortly after my sophomore year at Mercy.

I had just come back from co-piloting my first flight, and as I was walking by the hangar, the program’s mentors had asked me if I was interested in seeing what they were working on and helping out. I had just had a great season with Mercy’s robotics team (TechTigers 3654), so I knew this was a great opportunity for me to build on skills I had developed from robotics. I spent a lot of my time at the airport doing repairs for any mechanical difficulties we would encounter, as well as fine-tuning parts for assembly and assembling subsections of the plane (i.e. avionics, engine wiring, and body work). The RV-12 took its first flight this May, and I actually co-piloted it In August ! It was such an amazing experience, getting to co-pilot a plane that I have contributed to building, and I am so incredibly grateful that I had the opportunity to do so. One thing I’ve learned over the years is to take advantage of opportunities presented to me, and with this I’ve done just that!

The TechTigers taught me how to use tools and how to use them correctly, and so I was able to bring those skills to the airplane project. Those foundational skills were built on as I used different, sometimes more complex tools. After I had joined this build team, I had been working on both the robotics team and the build team over the duration of my high school career. Together, these teams were able to instill confidence in my mechanical aptitude as well as confidence in myself, which to this day is very valuable to me.

Throughout my time with the plane and robotics, I visited aerospace companies, one of which my grandfather works for, on outreach (for robotics) and family day tours. Seeing the projects worked on at Pratt & Whitney, Collins Aerospace, and other companies has further inspired me. After working on the airplane, I was sold on working towards a career in the aerospace industry."

The sky's the limit for Kylie!