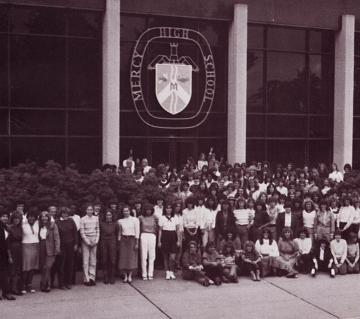 The original purpose of the school was "to aid in the formation of young Catholic women and to help prepare them to take their proper places in life, while being at the same time, practically conscious of their eternal destiny." Mercy High School continues to provide a Catholic education for young women within a community atmosphere. The purpose of their education is to prepare the students to meet the challenges of today's world.

Four principals have guided the school in this mission: the Reverend John Kane (1963-1971), the Reverend Daniel McGrath (1971-1978), Sr. Mary McCarthy, RSM (1978-2012) and Mrs. Melissa M. Bullock (2012-2014.)  In 2014, the Board of Trustees announced an administrative structure change. Mercy High School adopted the President and Dean model of governance with Sr. Mary McCarthy, RSM as the  President of Mercy High School.  Ms. Alissa DeJonge, Mercy Class of 1995 is the current President of Mercy High School. Mrs. Melissa Bullock is the Principal of Academics and Technology and Ms. Ann E. Drewry '97 is the Principal of Student Life.

In 1994, Sr. Mary McCarthy recommended the creation of a principal's council to serve in an advisory capacity to the school. This was approved by the Bishop of Norwich. In 1999, the governance of the school changed to a board of trustees. At that time a special agreement was established to formalize the continuing support and influence of the Sisters of Mercy at Mercy High School. To guide the school in its continuing growth and development, a strategic plan was developed by the principal's council in 1994, and updated by the Board of Trustees for 2000-2005, 2006-2010, 2011-2016 and again for 2017-2020.

The most recent strategic plan was developed in September, 2017.  Progress on the plan is updated and reviewed annually by the Board of Trustees.

The spirit and teachings of the Sisters of Mercy and their foundress, Catherine McAuley, are an integral part of the teaching and spirit of the Mercy High School community. A deep understanding of Catherine's vision of service and commitment to the education of young women has been fostered throughout the history of the school.

It is with this vision and response to the need to grow that Mercy has continuously improved its facility, curriculum and services, while retaining its identify as a Catholic college preparatory school for young women. To enhance the academic program and meet the ever-changing needs of students, the former convent was renovated into a "new wing" to include classrooms, guidance department suite, art rooms, a darkroom/photography lab, two computer labs, and offices. The library media center was enlarged, a computer lab was added, and all science labs were renovated. Wireless technology was installed, and all faculty received laptop computers for classroom instruction, research and professional development. Mercy also participates in Mercy Learning Online, a distance-learning program established by and for Mercy secondary schools. Athletic fields have been renovated and expanded, and upon completion of a successful capital campaign, a new state of the art gymnasium was opened in 2007.

Mercy programs now extend beyond the physical walls of the school and include Go The Mile, a leadership program for students which has been held at the University of  St. Joseph in West Hartford, CT. and the support of girls and young women in Haiti.

Mercy High School is sponsored by the Diocese of Norwich and is affilliated with  Mercy Education System of the Americas. The Mercy Education System of the Americas was formally established July 1, 2017 to insure Mercy sponsored, cosponsored, and affiliated education ministries are identified within the mission of the Catholic Church and are faithful to the charism, mission and core values of the Sisters of Mercy.

Mercy High School received initial accreditation from the New England Association of Schools and Colleges in 1973, and was reaccredited in 1983,1993, 2003, and 2013. As the Mercy High School community looks to the future it is proud of its rich heritage and traditions, and looks forward to continuing to educate young women for many years to come.

In 2017, Mercy High School became one of approximately 1,500 schools worldwide to implement the AP Capstone™ diploma program―an innovative program that allows students to develop skills that matter most for college success, such as research, collaboration, and communication. The program consists of two courses taken in sequence: AP Seminar and AP Research. Developed in direct response to feedback from higher education faculty and college admission officers, AP Capstone complements the in-depth, subject-specific study of other Advanced Placement courses and exams.

Call Us Today To Join Our Top Rated High School!