It has been 23 years since Xavier and Mercy came together for one of the greatest traditions: the Walk-A-Thon. But this October, the Mercy/Xavier Walk-A-Thon returns.

In the lead-up to Oct. 22, both schools will share a story every Thursday.

Stay tuned for more information on how to donate and be a part of this year’s Walk-A-Thon. But for now, please enjoy this trip down memory lane…

It was a huge success, not only for the money it raised, but for the spirit it engendered between the schools.

All of the money raised, despite which school brought in the most, was split down the middle. 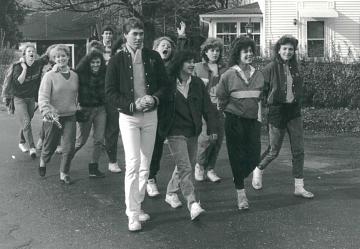 “The MX Development Corporation was put together to raise money for each school,” remembered Larry McHugh, who was president of the organization back then. “We wanted an event that both schools could get involved in, and we came up with the idea of a walk-a-thon. We wanted to raise money, establish a lot of spirit between the two schools and get more people involved in supporting the schools.”

“I thought it was a great event because it really got the kids involved, and with that it got the parents involved. At the time I don’t know how many other groups were doing walk-a-thons, but after that other people jumped on the idea.”

It took a lot of coordination, and that was noted in the 1975 yearbook: “In a large

newspaper ad, Mr. McHugh praised the community for supporting the project, lauded the enthusiasm of the students from both schools and was grateful to police and firemen, explorer scouts, citizens band radiomen, parents, 807 students, and to all who helped.”

There was a lot of competition: which school could raise the most money, which homeroom would come out on top, which students would get the most sponsorship money.

And there was a lot of camaraderie. 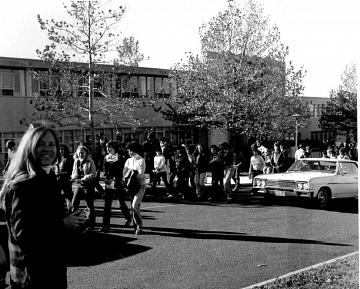