The Call to Mercy

To Walk in Their Footsteps:

Honoring the 150th Anniversary of the Sisters of Mercy in Middletown, CT

As the final bell sounds at the end of a long school day, a committee of faculty, staff and administration gather to pray. They are dubbed the “Mercy Circle” in collective spirit of keeping the mission of the Sisters of Mercy thriving within their community. Several months later, after much discussion and collaborative efforts, they are prepared to host a celebration honoring the arrival of the Sisters in Mercy in Middletown, Connecticut from their home turf of Ennis, Ireland which occurred 150 years ago.

Who were these remarkable women and what is their story? In May of 1872, a band of eleven Sisters of Mercy arrived from their Ennis convent after being summoned to staff parochial schools in Middletown and Meriden, Connecticut. Their immediate response of “we are ready” was the enthusiastic motto that carried them through their lifetime of service. In the years that followed, the original Middletown seven founded St. Elizabeth Convent and Academy, also taking charge of St. John’s School, while other Sisters later established Mercy High School as well as St. Vincent de Paul Place among other feats. Some did not live to witness the fruit of their labors, but the Mercy Circle is proud to acknowledge all that the “walking nuns” accomplished.

Library Assistant and Mercy Pre-Associate, Christina D’Amico ’13, fosters a sincere admiration of Catherine McCauley and the Sisters that has grown throughout her education at Mercy institutions, continuing with her travels to Mercy International Centre in Dublin, Ireland. D’Amico explains her historical research process within the first few months she began working at her alma mater:

“In conjunction with Librarian and Media Specialist Jennifer Crutchfield who consulted Mercy archives in North Carolina and Ireland, I poured through books and records to compose a timeline of the Sisters’ early beginnings from Ennis to America. We were simultaneously gifted with numerous articles, documents and photos from Sister Ann Mack, a pastoral associate at St. John’s Church. I was immensely glad to speak with her about everything she had collected. As a result of her contribution, dots were connected and vital information filled in. From the names of the original Sisters to accounts describing the voyage, their first meal in the convent, and objects from a 1905 time capsule, I was thrilled to dig through this treasure trove of what was earmarked to be disposed of the next day, according to Sister Ann. At the first Mercy Circle meeting I attended, no one knew who these figures were. Now, I feel a personal responsibility for keeping their story alive because of how truly special they have become to me. These young women agreed to an uncertain challenge, not knowing that they would never return home.”

On Saturday, April 23rd, a moving memorial service organized by Theology instructor Margaret Malafronte was held at the gravesite of the original Sisters of Mercy; members of the Mercy High School community, lead by a bagpiper, processed with floral bouquets to place on each of the headstones.

As the afternoon of Friday, May 6th approached, the school-wide body, along with local Sisters of Mercy, friends and family viewed a touching reenactment play of the Sisters’ journey, written by Campus Minister, Ann Derbacher and directed by teachers Michele Dastoli and Lorra Webb. Mercy’s registrar Sr. Peggy O’Neill, RSM recalls, “From the opening song ‘Women of Mercy’ to ‘Circle of Mercy’ at the end of the performance, the Mercy High School singers, readers, and actors beautifully told the story of the first Sisters of Mercy. It was a wonderful day to celebrate, to honor and to thank the seven Sisters of Mercy who answered the call to leave Ennis, Ireland in 1872 and come to Middletown, Connecticut. This was a special day to remember and to celebrate all the Sisters of Mercy of the Americas especially those who have served the Middletown community during the past 150 years.”

“The play touched my heart!” Sr. Georgeann Vumbaco, RSM agrees. “I was very impressed with the students and faculty that were involved with the play. It was very moving. The songs and acting brought us back to what the first Sisters of Mercy in experienced in Middletown.” A reading of the proclamation declaring May 7th Sisters of Mercy Day was given and afterwards, many visitors enjoyed the timeline currently on display in the school’s Library.

We are truly grateful to all administrators, faculty, staff, students, and friends of Mercy who were involved in this milestone project:

D’Amico reflects: “Many thanks to everyone who allowed me to reverently exhibit these rare artifacts and pay homage to the ones who came before us. One year ago, I could not imagine I would be here, shedding light on the Sisterhood that has influenced my own path thus far. I can only hope that they are proud.

Chronicles of  the Sisters of Mercy arrival in America, Middletown, CT and their legacy 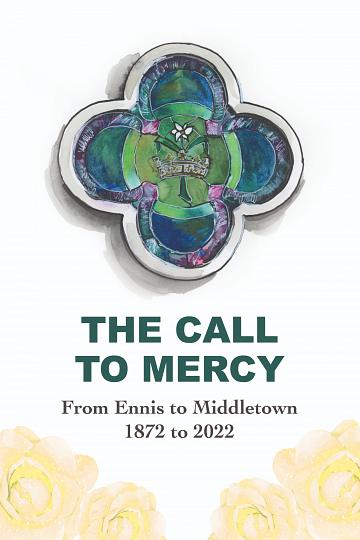 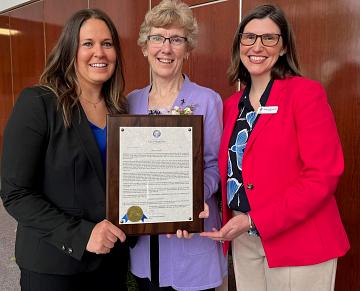 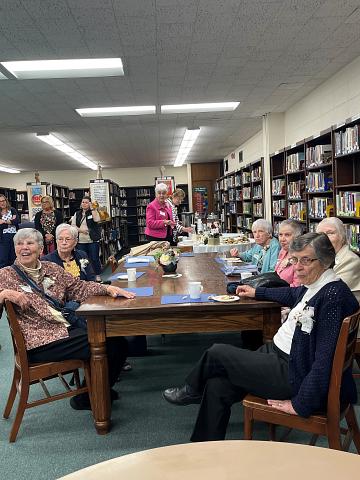